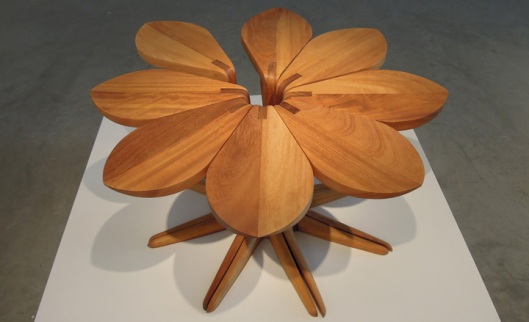 Dubai, the heartland of the Middle East and a country with only 40 years of history, is approaching the outside world with an open mind and welcoming arms. Already a playground for international starchitects, it is now luring in international designers and galleries too. Last week it played host toDesign Days Dubai, the first fair dedicated to collectible design in the Middle East, which saw a troop of international and local galleries come together to flaunt their wares before the region’s growing breed of eager collectors.

DDD’s director Cyril Zammit concept- ualized, organized, marketed and executed the fair in the space of just eight months, strategically starting it a few days ahead of Art Dubai, when many of the local collectors were already starting to scout for new works. 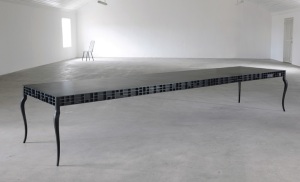 A total of 22 galleries from around the world gathered in the spacious, purpose-built tent in front of the world’s tallest building, the Burj Khalifa, hugged by shopping Mecca, the Dubai Mall. It brought together fair regulars like Carpenters Workshop Galleryfrom London, Priveekollektie from The Netherlands, Nilufar from Milan, as well as 20th century dealers like La Galerie Nationale from Paris and R20th Century Gallery from New York.

Local players included Wallpaper* Design Award-winner Carwan Gallery, and SMO Gallery from Beirut. There were also some fresh names in the line u, such as Sao Paulo’s +Coletivo Amor de Madre and Seoul’s _Croft, who had its first showcase of work outside its home town.

Some of the most well-received pieces included the Austrian-based design studioMischer’Traxler’s ‘Gradient Mashrabiya Sideboard’, designed for Carwan Gallery. Working with Lebanese artisan Roger Tohme, they translated ‘mashrabiya’ – a typical Middle Eastern architectural feature, incorporating lattice woodwork – into a sideboard composed of a network of more than 650 individual pieces of hand-carved wood.

Rodrigo Almeida’s ‘Oxum chair’ for +Coletivo Amor de Madre (which translates as ‘a collective of mother’s love’) gave us an idea of what post-Campana Brazilian design could be. Meanwhile, Beirut-bornNajla El Zein caught attention with an elegant light sculpture for SMO Gallery, entitled ‘6302 Spoons’.

The education program also played an important part in DDD. Live design performances by Korean designerKwangho Lee and Amsterdam’s Studio Drift, as well as seminars on investing in design-art by Li Edelkoort and Rabih Hage, were organized to cultivate and encourage the future generation of design collectors.

The four-day fair and a ladies-only afternoon attracted over 8,500 visitors from around the region. Strong sales were reported by some galleries, and others spoke about the importance of bolstering their contacts in the Middle East, but the pervading feeling at the fair was of an eagerness for creative ‘newness’, and an excitement about about the future of the design industry.